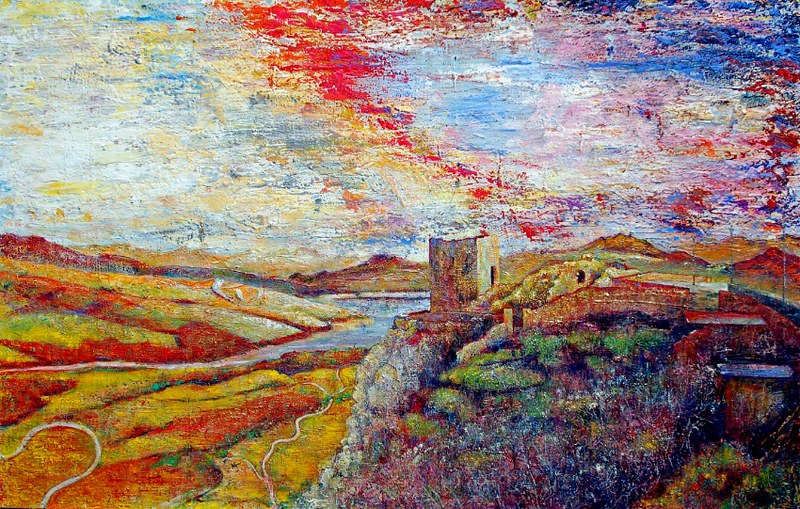 Like the mythical phoenix, Sicily has for millennia arisen repeatedly from the ashes of invasion and destruction to form herself anew, incorporating the residue of previous cultures and civilizations into each new expression of her timeless countenance. Jacqueline Treloar’s show of oils focuses on a long mountainous route with some of Sicily’s most spectacular scenery, a craggy, dramatic landscape that was the site of fierce fighting in the short Sicilian campaign of World War II.

Treating the landscape as a physical record of the collective histories that have transpired on the terrain, Treloar’s images make visible the echoes of past conflicts. Her use of impasto and cross-hatching replicates the accumulation of events and memories, bringing to life a complex and layered history. In July 1943, Canadian brigades landed on the south-eastern corner of the island, near Pachino. For the next 38 days they battled a 200-kilometer route of sheer gullies, knife-edged ridges and boulder-strewn river beds, towering cliffs and steep ravines, grappling with the German forces entrenched in the high hill towns and fortresses along the way. Echoes of the short yet intense Canadian campaign still reverberate in the quiet depths of this Arcadian countryside, and in the memories of the people, both Sicilian and Canadian, whose lives intersected briefly in this place and time.

Treloar’s passion for Sicily and its rich history has been a force of creative inspiration since the time she lived in Palermo from 2000-2003. She was particularly struck by the devastation left from the allied bombings of July 1943.. Stories from the local people about their experiences during the war, the shock of bombing and invasion, and their interactions with the young allied forces filled her imagination. Whereas the physical traces of this devastating conflict had been long expunged or sanitized in other western nations, in Sicily the remains have endured in their evocative decay, cradling the inhabitants in a memorial to destruction seemingly frozen in time.