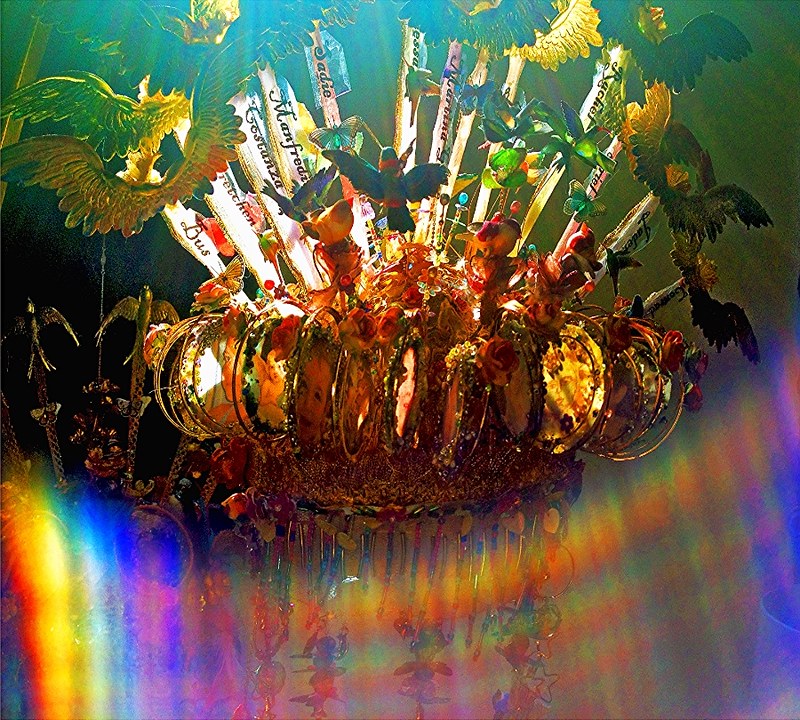 The ongoing project Crowns for the Queen of Heaven displays a set of four small circular crowns each being embellished and decorated to represent a period of life and a season of the year: spring is infancy and childhood; summer is youth, autumn the adult and winter old age

Elaborate beaded and stitched mixed media works on canvas and paper repeat the crown iconography and also use much of the material gathered from a research trip to southern Spain in July 2013. They includes paintings from images taken in the Santa Maria la Blanca synagogue in Toledo, the Mezquita in Cordoba, the Plaza de Toros de la Real Maestranza and Real Alcazar gardens in Seville, and the Nasrid palaces and Generalife gardens in Granada

The crowns have a plastic mesh form and are covered inside and out with rich fabrics and trims. They are embellished with a myriad of symbolic and decorative elements including artificial birds, flowers, fruit and butterflies, celestial stars and moons and beading. They all hold jewel motifs portraying images of family and friends.

The four small crowns are based on the crown of Constance of Aragon, interred wearing the crown which is now displayed in the Treasury in the museum of Palermo Cathedral. The crown was created in Byzantine-Arab style in Palermo by the royal jewelers from gold, pearls and large precious gems with enamelled details. Modified fleurs-de-lis are visible along the rim. (Often identified with French dynasties, the fleur-de-lis was in fact used as a royal motif by all of Sicily’s Norman rulers from their first arrival in Palermo.)

Another visual and stylistic reference is found in the Treasure of Guarrazar, an archeological find composed of twenty-six votive crowns and gold crosses that had originally been offered to the Roman Catholic Church by the Visigoth kings in seventh-century Hispania as a gesture of the orthodoxy of their faith and their submission to ecclesiastical hierarchy.

My fascination with the crowned statues of the Virgin Mary has evolved from my years living in the inner city of Palermo where religious processions and festivities are a part of the fabric of the city.

The exhibition title comes from Regina Coeli (Queen of Heaven), an anthem of the Roman Catholic Church which replaces the Angelus at Eastertide (from Holy Saturday until the Saturday after Pentecost) and is named for its opening words in Latin.

Crowns designed solely for statues became increasingly elaborate, especially in the Baroque period, often framed with a flat radiating “sunburst.” Votive crowns have continued to be produced in Catholic countries in modern times. They are typically kept in the church treasury except on special occasions such as relevant feast-days when they are worn by the statue.